The chairman of the Pakistan Cricket Board(PCB), Ramiz Raja, lost his cool when an Indian journalist asked him a provoking question involving ‘Awam,’ translated as citizens of a said country. In a video, being circulated on social media Ramiz Raja can be seen blasting the Indian journo after Pakistan lost to Sri Lanka in the final game.

While speaking to the media after the final game, Ramiz Raja confronted an Indian journalist who asked him a question saying; “Awam bari nakhush hay un k naam koi sandesh,” which means that the people of Pakistan are not happy with the game results and he asked Ramiz Raja if he wants to give any message for the ‘Awam” To which Ramiz Raja replied; “Aap to India say hain, apko Awam to Khush Hoge (You are from India, your people might be really happy)” 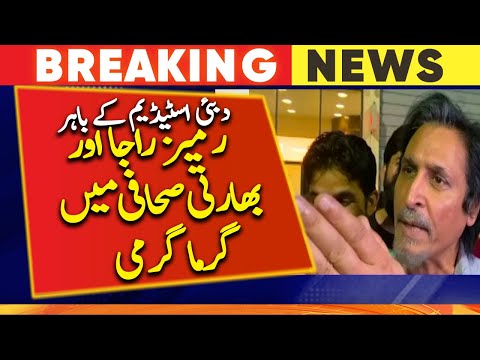 The Indian journalist took to Twitter to express his dissatisfaction over the incident, he said that the PCB chief must not have taken his phone. He said; “Was my question wrong – Are Pakistani fans not unhappy – It was very wrong as chairman of a board – you shouldn’t have snatched my phone – that’s not right Mr.Chairman. Taking my phone was not right”

Recently, Ramiz Raja reacted to Afghan fans’ hooliganism in the Sharjah Cricket stadium saying that he would raise the matter in front of the ICC. He said in a video statement; “You don’t identify hooliganism with cricket. This is bad. You don’t want such things happening in cricket. We will send a letter to ICC, we will raise our voice against this. We will do whatever we can. Because the visuals were really bad and this isn’t the first time it has happened.”