Telegram’s CEO, Pavel Durov, recently lashed out at Apple over the company’s “obscure” App Store review process that is delaying Telegram from releasing an update to its app that will “revolutionize how people express themselves in messaging.”

In his Telegram channel, Pavel Durov says that an update to Telegram for iOS that will change how people communicate has been stuck in Apple’s ‌App Store‌ review process for over two weeks, with no communication from the company over why or when it will be approved. Pavel Durov points out that if an app as popular as Telegram receives this treatment, one can “imagine the difficulties experienced by smaller app developers.”

“For example, our upcoming update – which is about to revolutionize how people express themselves in messaging – has been stuck in Apple’s “review” for two weeks, without explanation or any feedback provided by Apple”, stated the Telegram CEO. “If Telegram, one of the top 10 most popular apps globally, is receiving this treatment, one can only imagine the difficulties experienced by smaller app developers. It’s not just demoralizing: it causes direct financial losses to hundreds of thousands of mobile apps globally.” 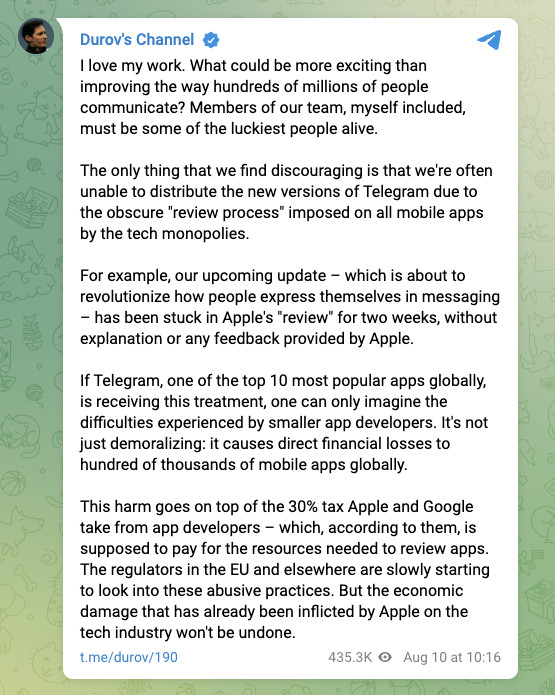 Durov, a vocal critic of Apple and its ‌App Store‌ in the past, points out the controversial “Apple tax,” which gives Apple a 30% cut of certain in-app purchases from eligible apps that make over $1 million annually. Durov calls Apple’s behavior “abusive” and says that damage inflicted by the company “can’t be undone.”

It’s unclear exactly what’s in the new update, Apple and Telegram didn’t immediately reply to a request for comment. This isn’t the first time Durov has called out Apple for its app review processes. In 2018, Durov said that Apple had been blocking updates to the Telegram iOS app after Russia banned Telegram. A day after Pavel Durov posted about the issue, Apple approved an update.